I recently found a very nice Git server named Soft Serve. This software offers both a git server to store repositories and a nice TUI front-end to list the stored repositories.

This is quite a recent software so there is not a lot of documentation on how to install it. Thus, I want to talk here about how to configure and use it. 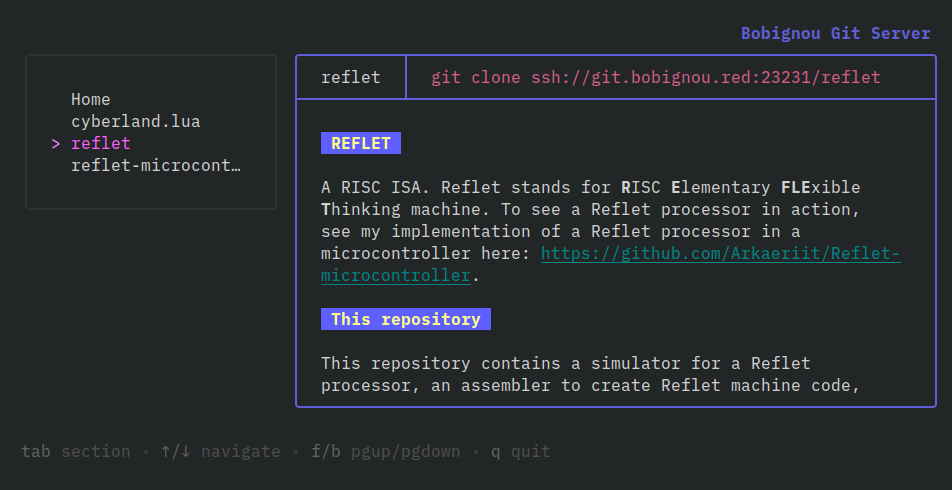 Soft Serve uses SSH for communication with the external world so there is no need to mess with Nginx proxies or whatnot.

On the Github page of Soft Serve there are releases for a lot of different platforms. But you can also compile the software for source if you have go 1.16.1 installed. Once compiled, you just have to copy the binary soft in the folder you want (I put it in /usr/local/bin/soft) and it should work.

First, I had to create a folder (/srv/data/soft-serve) where Soft Serve could store its configuration and the repositories. Once this was done, I wrote the following systemd service:

The fields WorkingDirectory and ExecStart will change depending on where you stored the soft executable and where you want to store Soft Serve data.

I stored the service file at the path /etc/systemd/system/soft-serve.service. Then I simply had to type systemctl enable soft-serve && systemctl start soft-serve to launch the server.

Once the server is launched you can test it with the command ssh localhost -p 23231. You should be greeted by a tasteful TUI. Here, you can copy the command git clone ssh://localhost:23231/config which will be used to configure Soft Serve. Use this command to clone the configuration repository. In this repository, edit the file config.yaml configure the server.

As I want to open the git server to the world but only let me and a few other people edit the code in the repositories, there are multiple fields in the configuration I need to change. * host: As I want to log to the git server with an URL, I must change the host to match this URL. Thus, I set it to git.bobignou.red. * anon-access: As I want to only let a small set of users edit repositories but II also want to let anyone read them I set the field anon-access to read-only. * allow-keyless: This field must stay to false because I don't want anyone to be able to freely use the Git server. * users: To choose which users are allowed to edit the repositories, I must fill in the list of users, and copy-paste their public keys for them to be identified. Here is a dummy example of a dummy user:

Then I just have to do git add config.yaml && got commit -m 'Config for public use' && git push origin master and the configuration is uploaded.

As of now, there is not much to customize the look and feel of the TUI. We can still edit the name field of config.yaml and the file README.md to change the title and the text of the homepage of the TUI.

Once the setup is finished, most of the work is done. From here, the information on the project's GitHub README.md is enough to use the server but I still want to detail them.

To browse the repositories on Soft Serve, the TUI is very convenient. By typing ssh -p 23231 git.bobignou.red I can easily see all the repository I pushed and their README.md. The command used to clone the repository is written in the right box which is really neat.

In the comments of the file config.yaml it is written that only the repositories listed in the configuration file are shown in the TUI. In the version of Soft Serve that I use (0.1.0) this is not the case, all the pushed repositories are displayed in the TUI.

Once all of this is done, you can use the remote just as any other remote Git server such as GitHub, GitLab, or Gitolite.

I host the web interface under the URL git.bobignou.red.