SSH is a nice technology. Not only can it be used to securely access another computer, but it can be used for other encrypted communication. Indeed, running a custom-made SSH server can be a way to expose nice services to the outside world. I want to give here some examples.

The organization Charm made a lot of interesting services such Soft Serve that I presented in another blog post. Another very interesting project they made is the Charm Cloud. On a host machine, you run an instance of this server and it can be used to sync your data between different machines. For example, I use it with Skate to create todo-lists that are synced between my different machines.

If you don't want to set up your own instance of Charm Cloud, a public version exists. As the data are encrypted with your SSH key, you can expect them to stay safe.

Charm Cloud and Soft Serve are nice as services you self-host for your personal use but some other projects are meant to be used by everyone in a more centralized manner. For example, Devzat is a chatroom running over SSH. You can access it by running the command ssh <your nick>@devzat.hackclub.com with any ssh client such as the OpenSSH client.

This nice open-source project is written in Go and open to contributors.

Furthermore a machine on Hack The Box have been made being inspired by devzat. 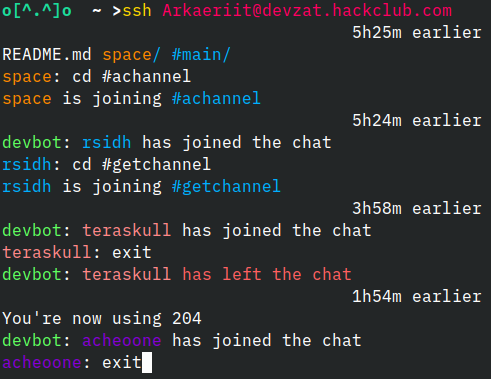 Analog City is a text-board running over SSH. If you want to join the other Pagans, you can do so with the command ssh lowlife@45.79.250.220. There is no domain name but some ways to keep track of the IP without using DNS are being worked on as I write this post.